Welcome back to another weekly preview. Thanks for reading! We just crossed the halfway point for the season and we are in a steady race towards the inaugural college football playoff. I managed a decent week picking last week going 6-4 outright and 5-5 ATS, bringing me to 30-16 and 17-28-1 for the season. Ross also showed some modest improvement going 5-6 outright, but only 4-7 ATS. His season totals now sit at 22-15 and 11-25-1, respectively. Without further ado, this week’s slate is: Kansas State vs. Oklahoma, Alabama vs. Texas A&M, Oklahoma State vs. TCU, and Notre Dame vs. Florida State

Baylor, Oklahoma, and TCU seem to have established themselves as the head of the class in the Big 12 so far this season. However, they each play games against teams that have the chance to challenge that this weekend. We will take a look at Oklahoma State vs. TCU later, but for now let’s turn our attention to Kansas State and Oklahoma. Bill Snyder’s Wildcats only loss of the season was that Thursday night game against Auburn a few weeks back. Oklahoma fell to TCU two weeks ago, so the loser of this one is all but done in the Big 12 race. An X-factor in this one is Tyler Lockett in the punt return game for Kansas State. He leads the conference in punt return yards per game. I just don’t feel comfortable taking a team who’s most impressive game-to-date is a loss though, so I’ll take the Sooners to roll in this one.

Samaje Perine and Keith Ford are two of the best running back duos in the country, let alone the conference. They have combined for 14 rushing touchdowns and a receiving score in the first six games, even though Ford has only played in 3 games because of a fractured foot earlier in the season. The KSU linebacking corps will need to bring their A-game on Saturday led by seniors Jonathan Truman and Dakorey Johnson. Elijah Lee is also a promising freshman in this group.

Big Game Bob has come up….well big the past few years against Kansas State. He’s won 8 out of the last 10 matchups and this weekend’s showdown is in Norman. If you saw last week’s College Gameday segment on Sterling Shepard, then you can’t help but pull for the kid. Plus, it helps that he has 34 catches for 714 yards on the year. I think Jake Waters at QB and Tyler Lockett at WR keep it close in the first half but the Sooners led by Shepard and Trevor Knight pull away in the second half. Boomer Sooner 35, Roll Snyde 24.

This game really gives me the willies. My head tells me that Texas A&M matches up extremely well in this one. Alabama is exceptional at defending the run, but vulnerable to a high-powered passing attack, like the Aggies. However, Hill has looked shaky in the last two weeks, and somewhat turnover prone. Alabama has had some offensive struggles of its own, but Texas A&M is significantly worse defensively (although improving) than Alabama’s previous two opponents. This may be more what I want to happen than anything, but I’m sticking with the Tide.  Alabama is still pretty tough to beat at Bryant-Denny.

Once again, there are many ways I could go with this one. At the end of the day, I think A&M will score some, and I think Alabama can too. The critical thing is going to be what Alabama’s offensive line can do with super freshman Myles Garrett and the rest of the Texas A&M defensive line and linebackers. If they can give Sims time and allow him to get comfortable, and open up some holes in the running game; then the Crimson Tide will win on Saturday (barring more significant special teams gaffes). Leon Brown this last statement is for you. Camp Smile-a-Mile is a camp that is very near and dear to my help, and they were generous enough to let me serve as a counselor the last two years. If you, Leon Brown, can play 30 snaps or more on Saturday without a holding penalty or a false start, then 4 Down Territory pledges to donate no less than $100 a year to Camp Smile-a-Mile every year for as long as 4 Down Territory exists (and we’ll increase that number to $1,000 when our writers are no longer grads and recent grads still bumming off of their moms and dads). Make Alabama fans and the kids of Camp Smile-a-Mile happy this weekend boss. You can do it.

Alabama has been surprisingly sloppy on both sides of the ball this year with turnovers and penalties. Texas A&M, again, has no defense and a high-powered offense. This will be Kenny Trill’s biggest game of his young career on the road in Tuscaloosa. I think Phyllis from Mulga fires the team up with a pregame “TEXAS A&M CAN KISS MY BUTT” speech that sparks the Tide to a win, but not enough to beat the experts in Vegas. Fighting Phyllis’s 34, Yell Leaders 31.

As I mentioned earlier, the Cowboys of Oklahoma State travel to Fort Worth to play TCU this weekend. Let’s hope for the Horned Frogs’ sake that their defense has a short memory. I still contend that Gary Patterson is a good defensive mind. Baylor is just an offensive juggernaut. Mike Gundy’s Cowboys are still a little green too. Their only loss so far was an opening weekend nailbiter against Florida State though. Mike Gundy is a man (he’s over 40), but his CowBOYs are still just that…boys. OSU is a year away from making a legitimate run at the Big 12, and once again I just don’t trust a team whose most impressive performance is in a losing effort.

TCU’s defense is going to have an internal struggle this weekend. Their confidence might be down after giving up 61 to Baylor, but they can’t brood on that all week. If they do, Daxx Garman (what an awesome name) will shred them for the second week in a row. However, if they can shake it off and keep their confidence up, like I think they will, then they have a golden opportunity to show that they are better than last weekend’s nightmare performance.

For TCU, two things are clear….their offense is spectacular and their defense is horrendous. Anytime you score 58 points in a game you should win. Last week they scored 58 and lost. Luckily for TCU, they are facing a Cowboy defense that has 7 new starters. Mike “I’m a man” Gundy always has a good offense coming out of Stillwater so this could be another shootout in Fort Worth. I don’t think it will be quite like last week in the TCU/Baylor game but, I think the Horned Frogs will be partying like Tim Tebow’s first trip to Bourbon Street when it’s all said and done. TCU 48 Pokes 42. 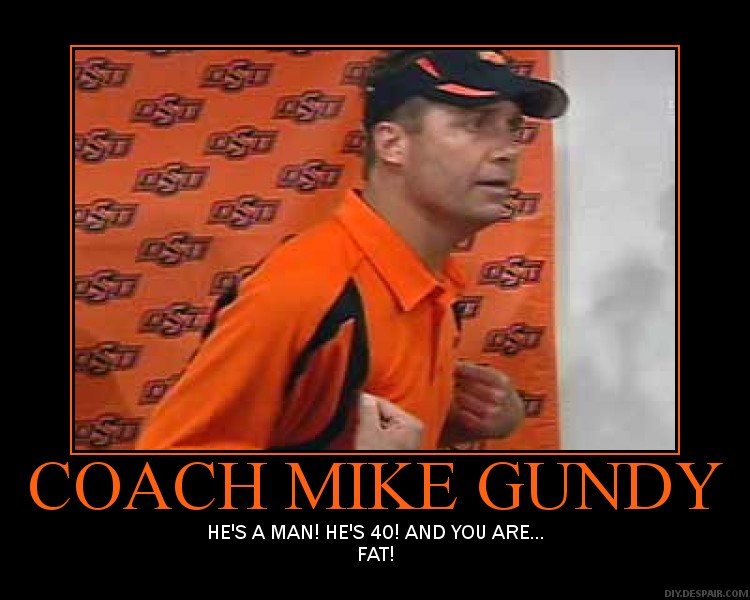 Will Jameis play? For now, I think it’s pretty safe to assume he will. This is the key question of the weekend, because if he doesn’t then I have absolutely no confidence in a Sean Maguire-led Seminoles team. I particularly don’t trust that when they are playing host to a Notre Dame team led by a potential Heisman finalist in Everett Golson. Golson has been hit by a case of the dropsies in the last few games though; fumbling 5 times in the last three contest. He will need to protect the ball better than that, if Jameis plays, for the Fighting Irish to have any chance.

I should call this section my bold prediction (actually it may not be that bold but whatever). I’m calling right now that Jameis plays and we have a solid showdown Saturday night between Jameis and Golson. I still think Jameis is probably the best player in the country, on the field at least, and at home it’s too hard not to take him.