I’m not going to be doing the top ten recruiting classes today, because you have Rivals, ESPN, 247sports, and Scout for that.  Today I’m going to be giving you the best class at each position or group.

I decided not to include return men in the Special Teams category, because they’ll fit under Athlete or Wide Receiver or something else.  This means that this category basically comes down to Kicker.  Scout.com actually does rank punters, but since nobody else does I didn’t either.  Aaron Medley is the #1 Kicker on ESPN and #3 on Rivals.  He will be in Knoxville next season.  Gary Wunderlich, no relation to that wacky NFL IQ test, will be going to Ole Miss.  He was Rivals #1 Kicker and ESPN’s #2.

This was a hard one to do, because certain places list guys as an Athlete and others will project them at a position.  Adoree’ Jackson and John “Juju” Smith are both committed to USC and both are listed as an Athlete on one site and a Defensive Back on the other, but on different sites actually.  If both of these guys end up on the same side of the ball, at either DB or WR then USC would certainly be at the top of that list too.  Adoree’ Jackson is a consensus top 10 overall recruit and Juju is a consensus top 25 overall recruit.  Honorable mentions here are Alabama who signed Athletes’ Ronnie Clark and Bo Scarbrough.  Clark will likely end up at linebacker at 6’3” 220, and Scarbrough will likely be added to the stable of running backs.  Texas A&M also gets credit for signing Speedy Noil, whose name tells you he will likely play WR and return man, and Nick Harvey who Rivals already lists as playing in the defensive backfield.

Alabama went quantity over quality with their defensive back signings this year.  Marlon Humphrey and Tony Brown are both considered top 10 overall recruits on at least one site.  They will play CB for the Tide and Laurence Jones is the #3 Safety on ESPN and #4 on Rivals.  LSU had big safety signings with Jamal Adams and Edward Paris, but no big corners.  Florida on the other hand signed several key corners: Jalen Tabor, J.C. Jackson, Quincy Wilson, and Duke Dawson.  However, they failed to get a big time safety.

Starting to feel redundant isn’t it?  The Tide hauled in another solid linebacking class.  They pulled off maybe the biggest surprise of signing day yesterday by getting Rashaan Evans from Auburn, who is the #1 OLB in the country.  To add to Evans, they also bring in OLB Christian Miller and ILB Shaun Dion Hamilton, from my hometown Montgomery, Al.  Plus, if Ronnie Clark plays linebacker as expected that will bolster this unit even more.  Ohio State also had a solid class with #1 ILB and ESPN’s #13 overall player Raekwon McMillan and #4 ILB Dante Booker.

Alabama had a strong case here again with Rivals #1 overall player Da’Shawn Hand and Defensive Tackle Josh Frazier.  However, the nod goes to Texas A&M with the signing of Rivals #2 overall player Myles Garrett.  To go along with Garrett at DE, they also bring in Jarrett Johnson and Qualen Cunningham, the #19 and #7 strong side defensive ends respectively, and at defensive tackle DeShawn Washington and Zaycoven Henderson, #9 and #12 at their position respectively. 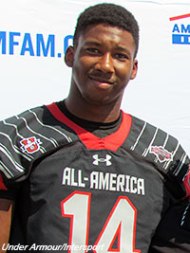 Alabama reloaded again at probably the most important position in recruiting, the offensive line.  They signed #1 and #3 Centers: Joshua Casher and J.C. Hassenauer,  4-Star Guards Dominick Jackson and Montel McBride, and #1 Tackle and ESPN’s #3 overall player Cameron Robinson.  Ross Pierschbacher was a Parade All-American Tackle along with Robinson, and is also rolling with the Tide.  This one wasn’t even really that close.

Georgia signed the Rivals #1 and ESPN #2 Tight End in Jeb Blazevich, but Clemson and Notre Dame were the only two programs to get two tight ends in the ESPN 300.  Milan Richard and Cannon Smith are going to Clemson, while Nic Weishar and Tyler Luatua are headed to South Bend.  Tennessee also managed to sign a pair of highly recruited tight ends in Daniel Helm and Ethan Wolf, the #2 and #19 TEs on Rivals respectively.

This was another position that came down to a toss-up.  Florida State got Ermon Lane and Travis Rudolph.  Lane is #2 on ESPN and #5 on Rivals, while Rudolph is #1 on Rivals and #6 on ESPN.  Not to be outdone, LSU also signed a pair of stud wideouts in Malachi Dupre and Trey Quinn.  Dupre is #1 on ESPN and #2 on Rivals, and Quinn is #3 on ESPN and #10 on Rivals.  The other group worth mentioning here is Clemson, who brought in four top 25 wide receivers: Artavis Scott, Trevion Thompson, Demarre Kitt, and Kyrin Priester (who actually signed last year but spent a year playing JUCO so he counts with this year’s class).

Leonard Fournette is the ESPN #1 player in the country and a player whom many consider to be the next Adrian Peterson is going to LSU.  However, my hopefully soon-to-be alma mater managed to nab a pair of 5-star backs in Nick Chubb and Sony Michel, who is the ESPN #19 overall player.  Adding Michubb to the already potent stable of running backs headlined by the other two-headed monster, Gurshall, may make this the most talented group of running backs in this country.  (Note: Nick Saban just screamed at me and several Finebaum callers have already emailed me demanding that I remove this blasphemous statement from this article). 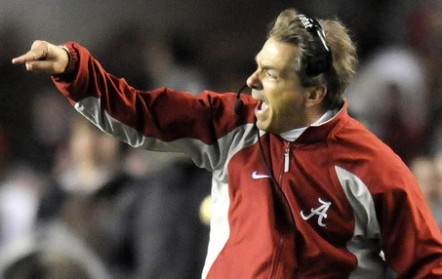 Texas A&M signed the #1 quarterback in the class in Kyle Allen.  Many believe Kenny Hill will start in College Station next season, so Allen may not have to step in and play immediately.   Given he would have to be filling the shoes of Johnny Manziel, this might not be a bad thing.  Considering the last time a quarterback had to fill the shoes of an SEC quarterback this huge not only did he turn out to be a huge bust, but so far so has his successor.  We’ll call this the “Tebow effect”.  Speaking of Florida, they managed to sign a pair of highly touted dual-threat passers themselves in Parade All-American Will Grier and ESPN #3 dual-threat quarterback Treon Harris.