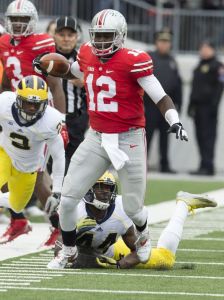 Confetti fell and Ohio State football reigned supreme as the inaugural College Football Playoff concluded last night in AT&T Stadium. The sensational J.T. Barrett, who broke the Big 10 record for touchdowns in a single season, set by Drew Brees, led the Buckeyes most of the season. However, Barrett went down with a serious injury (much like Braxton Miller before him) and Ohio State had to turn to its 3rd string quarterback.

Cardale Jones took over and never looked back.

Jones staggering size (6’5” and 250 lbs.) and arm strength allowed the Buckeyes to continue their title run and Jones was bestowed with one of college football’s best nicknames, “12 Gauge.”

You all likely know what happened since, with Jones leading the Buckeyes over Wisconsin (59-0), then Alabama (42-35), and Oregon (42-20). Jones proved doubters wrong and became the unlikely leader of the Ohio State offense down the stretch.

Now, Jones finds himself in a vexing situation.

He could return to school and face a heated quarterback battle with J.T. Barrett, who will likely start next season. Things could be even more difficult if Braxton Miller returns to Ohio State next season, although many feel his days in Columbus are over. Lest we forget, Braxton Miller has accounted for 84 touchdowns in 3 seasons as the starting quarterback and led the Buckeyes to a record of 28-8 in his 3 years at the helm. It is important to remember, that Miller only started 10 games in his freshman season under an interim-coach in Luke Fickell when the team went 6-7.

Jones is by no means assured to be the starting quarterback and would have to sit out a season if he decided to transfer.

Should Cardale Jones, who is eligible to enter the NFL Draft, simply leave Ohio State and pursue his NFL career?

The draft process is odd, in that players that we have seen perform at a high level for years will soon be criticized for every possible flaw, even when the “flaw” is the reason they were praised in college.

I can assure you that some analyst will say that Marcus Mariota is “too nice” or something along those lines. They will cite this as a reason why he won’t be a great NFL player.

Cardale Jones has the NFL measurements. He is relatively quick for his stature and has good speed in the open field. In terms of arm strength, I am not sure if anyone can match his ability to make “NFL throws.” I suppose you could make the argument that Jameis Winston has equal arm strength to Jones, but his stock will depend much more on his character and maturity.

Jones showed a lot of upside and has a high ceiling. I feel confident that an NFL team would draft him if given the opportunity.  Jones lacks the typical quarterback prospect resume, but those factors would likely be ignored due to his upside and the reality that in the NFL you must have a great quarterback in order to win consistently. This weekend will feature the following quarterbacks: Russell Wilson, Aaron Rodgers, Tom Brady, and Andrew Luck.

Each player excels in his own way, for example, Wilson consistently makes plays in big games that extend drives and (despite playing in a run-oriented offense) has excellent arm strength for a short quarterback. Rodgers has unbelievable accuracy and rarely throws interceptions despite playing in an offense that can be pass heavy. Tom Brady is perhaps at his best when the weather is at its worst and has accomplished so much in his career with average receivers. Last, Andrew Luck is such a cerebral player and has thrived in the NFL despite the expectations heaped upon him.

Any NFL team in need of a quarterback would be forced to consider Cardale Jones.

His small sample size is a non-factor. There are plenty of players who had much more impressive resumes (A.J. McCarron & Colt McCoy come to mind) that have fallen in the draft, so a great resume doesn’t assure a player of a particular position on the draft board.

Jones has started only 3 games and scouts will have only so many throws to analyze. He comes in very raw and can be molded to fit an NFL team’s needs. He has not become a creature of habit in a rigid offensive system, nor has he developed bad habits due to playing behind a poor offensive line, which often can lead to sloppy footwork.

Cardale Jones would likely remain behind Jameis Winston, Marcus Mariota, and perhaps Brett Hundley. Jones could surpass Bryce Petty (whom many feel is a product of the Baylor system) and Connor Cook. The rest of the available quarterbacks either have a fatal flaw or played against weaker competition. The buzz surrounding Jones could even vault him into the 1st or 2nd round.

Many people will say that Jones jump to the NFL is a risky move, and that he could soon find himself ill-prepared for such a role on an NFL franchise.

One must acknowledge that there are risks involved for Jones if he returns to Ohio State as well. He is by no means assured of the starting position and his stock would suffer if he performed poorly, was injured, or failed to beat out J.T. Barrett or Braxton Miller.

Cardale Jones will likely never be able to replicate the unprecedented rise in his draft stock on such a grand stage. He would face an intense quarterback battle back at Ohio State. Ultimately, the most important factor when evaluating NFL quarterbacks is the eye test. The age old “when you know, you know” type of test that often leads teams to draft players that stats or resumes don’t support. There are risks in drafting any player, whether they have been a starter for 3 years or 3 games. A quarterback either has the skills and ability to play in the NFL, or they don’t.

It is that simple.

Cardale Jones has an NFL future and he should capitalize on it right away.