Another week. Another preview. Ross may be making fun of our picks, but the other “4 Down” writer had a pretty good week last week. I went 6-4, both outright and ATS. That’s my first winning record against the spread this season. I also picked the exact score of the FSU-Notre Dame game. Bow down you mortals. Just kidding, but that does bring my totals for the year to 36-20 and 23-32-1 (outright and ATS respectively). Ross, on the other hand, managed a respectable 6-5 outright, but only 2-9 against the spread. That brings him to 28-20 and 13-34-1. Keep up the good work. Also, Leon Brown didn’t have a single penalty on Saturday! Camp Smile-a-Mile will receive $100 or more a year from 4 Down Territory for life!

Ole Miss is one of four undefeated teams left, and they face their toughest road test of the season on Saturday. It’s going to be a night game in Death Valley, where dreams apparently go to die. Of course, Mississippi State pulled off the upset at night in Death Valley earlier this season, and the Bayou Bengals aren’t as good as they’ve been in years past. I am curious to know when the last time LSU lost two home night games in a season though was, anybody know? Yeah, me neither.

The Rebels probably have the best defense in the SEC. Cody Prewitt, the Nkemdiches, Senquez Golson and Serderius Bryant lead the way for a fearsome defense. The run stoppers, Bryant and the Nkemdiches and co., will need to be on top of their game to slow down the LSU rushing attack. LSU has one of the best left-side offensive lines in football with La’el Collins and Vadal Alexander. They will try to pave the way for the myriad of ballcarriers the Tigers use. Running backs Leonard Fournette, Kenny Hilliard, Terrence Magee, and Darrel Williams will all get touches. Plus, both quarterbacks, Anthony Jennings and Brandon Harris, have 25 or more carries this season. If the Tigers can literally run wild on Saturday, then we may be seeing an upset special in Baton Rouge.

Prediction: Not so fast my friend Ole Miss-34 LSU-7

After getting stomped to open SEC play against Mississippi State (granted they made it close at the end) and Auburn, the Corndogs have bounced back against two East teams, Florida and Kentucky. LSU has gone back to their bread and butter; the ground and pound game. But, they go up against arguably the best defense in the country in the Rebel Black Bear Landsharks. Ole miss is giving up 10.6 points per game and are at the top of the country making big plays, as evidenced by Senquez Golson’s league leading 7 interceptions. Night games in Death Valley are always tough, and I think LSU will play better than they did against Auburn. But I’ve been riding the power of the Powder Blue Helmets all year so I’m not stopping now. Powder Blue Power 31, Bayou Bengals 20

Alabama’s been getting a lot of praise after their drumming of Texas A&M last Saturday. They are better than the Vols, but they are going on the road where they have struggled mightily this season. Blake Sims and the offensive line just haven’t been able to get it going away from Bryant-Denny this season, but sometimes things change. I think the Tide wins and shows some road improvement, but not enough to cover.

The Alabama secondary stepped up big in a shutout effort against the Aggies. They will need to be good again Saturday against Tennessee, because the Vols do employ a scary receiving duo with Marquez North and Pig Howard. Look for one of these two guys to find the end zone on Saturday. Jalen Hurd is a scary freshman in the Volunteer backfield as well.

Tennessee will have Alabama singing Rocky Top all weekend. But, not in a good way. It’ll go something like “Oh Rocky Top you’ll never be, home sweet home to me! Good ole Rocky Top! Bottom of the SEC!” Alabama absolutely annihilated Texas A&M last week. I mean honestly I was embarrassed for Kenny “Nill”, I mean Trill. Tennessee came into this year without a single starter on the offensive or defensive line and it shows. The only team to allow more sacks this year than Tennessee’s 30 is SMU (34). That’s not a good recipe for trying to pull off an upset against a Nick Saban coached defense. I like the Tide in Rocky Top. Fightin’ Phyllis’s 35, Volunteers 10.

My bold prediction for the weekend is that we will have at least one YouTube worthy moment from Steve Spurrier’s post-game press conference. The shirtless, golf-loving, visor-wearing Ol’ Ball Coach is in for a rough time on Saturday. Auburn is going to eviscerate South Carolina. It isn’t going to be very pretty. Look for Auburn to bolster their playoff resume and get the bitter taste of two weeks ago out of their mouths on Saturday. I just want to know who at ESPN thought it was a smart idea to kickoff this game, the Alabama game, and the Ole Miss-LSU game all at the same time? They need to fire that guy.

It’s not going to matter. Auburn is going to dominate them on both sides of the ball. In the season opener, Texas A&M shredded the Gamecock secondary. How many times have I mentioned Texas A&M in this post when they aren’t even playing this weekend? I’ll say the key is the Auburn receivers. Look for Duke Williams to continue his impressive debut season on the Plains, and Sammie Coates to get things going. Auburn is going to have a big day through the air. I’ll make another bold prediction and say the Tigers have 5 passing touchdowns in the game.

South Carolina has not looked like the same Gamecock team from the past few years. The defense is a mess and the offense can’t get things rolling. Auburn has had two weeks to prepare for this game and to sit and think about the loss in Starkville. South Carolina is near the bottom of the league in nearly every defensive category, which is not good when facing Auburn and Gus Malzahn’s offense. Auburn’s defense has also been vastly improved from a year ago, even without a constant pass rush. I look for the Tigers to have a big day running the football. I think this may be freshman Roc Thomas’s coming out party. This one could get ugly when it’s all said and done. War Eagle 45, Cocks 13.

Utah is one of those stealthy one-loss Pac-12 teams. They’ve flown under the radar so far this season, nationally at least. However, on that wild upset Saturday when Ole Miss was beating Alabama (among other upsets) they knocked off UCLA. Kyle Whittingham has probably saved his job with this start to the season. USC has two losses on the year, but because they’ve played more conference games than anyone else in the South and only one of their losses was in conference, they still lead the division currently. This is a late battle between two solid teams. I recommend you stay up after channel flipping between the major SEC games to catch this one.

Utah has a top 20 run defense, but they are currently ranked 100th in the FBS against the pass. Cody Kessler is having a phenomenal season at quarterback. The Trojan QB has 1,884 passing yards, has completed almost 70% of his passes, and 18 TDs to only one pick. Why doesn’t he have any Heisman buzz? I mean he is better than Matt Leinart (Heisman trophy winner), the Sanchize (butt-fumbler), and John David Booty (funny last name) right? USC has a good day through the air and that will be the difference, actually a field goal will be the difference (but the passing game will set up that field goal).

There is no picking against the spread on this game. This is against two teams with near identical rankings and near identical records. USC has already beaten Arizona on the road and beat Colorado at home last week led by Trojan Man Cody Kessler who threw 7 touchdown passes. The Utes have a stout run defense but rank near the bottom of the Pac 12 in passing offense. The USC defense, on the other hand, leads the conference with 9 interceptions. I hate to agree with Sam on all of our picks but this week is an unusually terrible week of games for this time of year so, unfortunately, I’m going with the Trojans as well, 28-20. 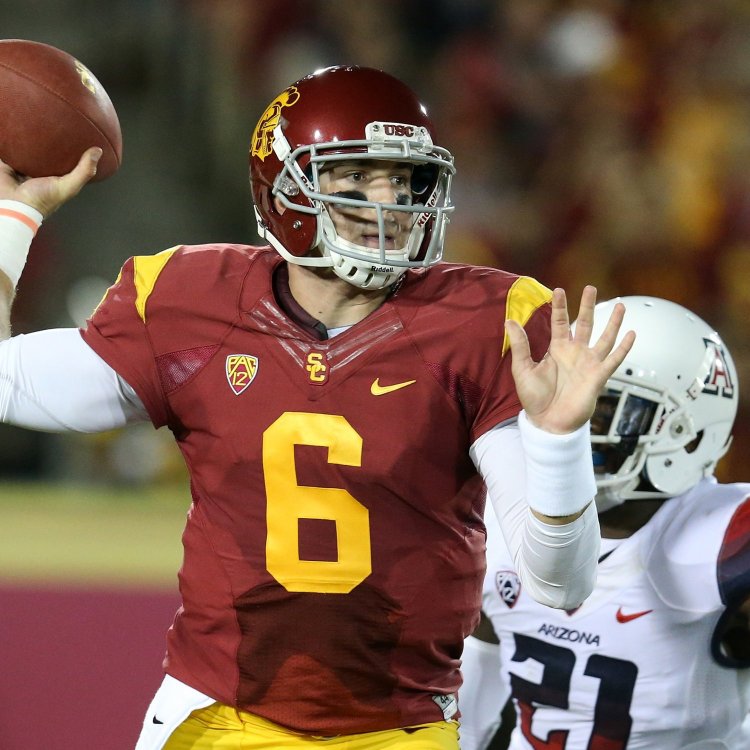