After a loss to the Denver Broncos in the AFC Championship, the Patriots will face a multitude of doubts as they enter the offseason.  The team finished 12-4 in the regular season and remained a legitimate playoff threat.  Unfortunately, the “eye test” made it clear that New England was not as good as its record indicated.

I want to address the Patriot offense first.  The unit is always expected to be prolific with quarterback Tom Brady and a talented coordinator in Josh McDaniels.  However, this season the unit was far from dependable.

Injuries plagued the offense and the Aaron Hernandez situation damaged the Patriot infrastructure.   With Hernandez dismissed from the roster, it would be pivotal for Rob Gronkowski to return to form and stay healthy this season.

The “Gronk” was injured for majority of the season and that forced McDaniels to rely on the untested Julian Edelman, Aaron Dobson, and Kenbrell Thompkins.

The team lacked continuity in the passing game early in the season.  Brady’s timing was off with his inexperienced receivers; we heard that was the problem.

The running game was inconsistent and plagued by Ridley’s fumble issues, Vereen’s injuries, and Blount’s sporadic success.  The Patriots have several good backs but they each have a niche that limits their capabilities.

So is New England simply a victim of personnel limitations?

I believe that New England’s issues are as much about their scheme as they are about their players.

New England runs an offense designed to elongate the career of Tom Brady.  In order to do so, it must limit the number of hits Brady takes.  The passing game has to be predominantly composed of quick routes and subtle play fakes.  The screen pass has become more and more common in the New England playbook.

Quicker passing routes mean shorter passes.  This scheme will allow a player like Julian Edelman to catch over 100 passes in a season.  The scheme relies heavily upon players being able to take the hits from linebackers and staying healthy.

In a more vertical passing attack defensive backs will tackle the receivers, but in the Patriot passing game the receivers might be tacked most often by linebackers.  The beating takes a toll on the receiving core (as evidenced by the number of injuries the Patriots endured this season).

The fans want Aaron Dobson to become Randy Moss but fail to realize that without a more aggressive route tree, it doesn’t really make any difference.  When Randy Moss played for New England, Brady was younger and the Pats were not trying to get three to four more years out of the aging star. 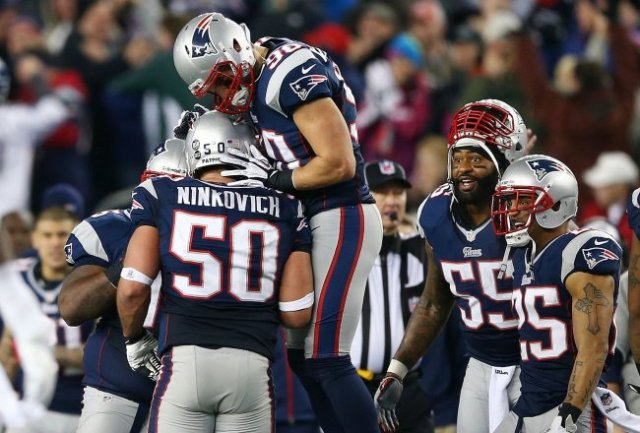 The majority of what held New England back this season was on the offensive side of the ball.  When healthy, the New England defense is still a very good unit.  The biggest issue this season was an average defensive line and a secondary that struggled during any stretch of time that Aqib Talib was out.

Vince Wilfork has anchored the New England defense for many years.  The veteran made a name for himself by making big plays from the line of scrimmage.  However, now past his prime it will be important to replace him going forward.

The linebackers suffered due to various injuries this season.  The defensive line was soft in the interior, limiting their unit’s production.  However, Jaime Collins stepped up as the year progressed.

I still believe the Spikes, Hightower, Mayo, Collins group is capable of being a top-tier unit in the NFL.

The defensive backfield remains too reliant upon Aqib Talib.  Talib is a great player but the unit can’t fold every time he is nicked up.  Talib was my “x-factor” when I previewed the AFC title game and his injury cost the Patriots dearly.

So what does New England need to do going forward to continue being a Super Bowl contender?

I would expect that New England will likely look to draft an interior defensive lineman in the draft.  A player like Louis Nix III would add essential depth to the line and serve as the ultimate replacement to Vince Wilfork.

I don’t believe that the Pats necessarily need to resign Julian Edelman, however, I expect that they will.  He has been productive this season and exceled in a tough situation.  I don’t think that Edelman is nearly as good as his stats would suggest after this season and would think that a more talented player could be acquired either through free agency or the draft.

It seems obvious that Gronkowski and Amendola will miss games each season because of injury (especially Amendola) so the receiving core will remain influx.

I really like Jace Amaro (TE) out of Texas Tech, Eric Ebron (TE) from North Carolina, and perhaps Kelvin Benjamin (WR) out of Florida State.  Any of these three players could positively impact the receiving core.

In respect to a sleeper pick for the New England Patriots don’t be surprised if they select Brandon Coleman out of Rutgers.  The big receiver has excellent height (around 6’6 ft. tall) and could help the New England red zone offense.  The Pats have selected several Rutgers players in years past and seem to really like what the coaching staff does there.