The Fear of Missing Out:  Baylor vs. Oklahoma

“Elite”:  The worst cliché in all of sports 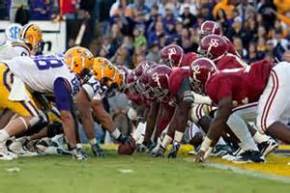 Alabama and LSU will face each other in Tuscaloosa, AL on Saturday.  This is the site of the famed “Game of the Century”, that I was lucky enough to be in attendance for.  However, this season I do not believe that we will be treated to such a decadent experience.

LSU comes in having lost twice on the road this season.  Mettenberger has struggled lately and hasn’t been himself in recent weeks.  LSU still boasts an offense loaded with talent, but their defense has me concerned.  The team simply became too young too quickly, especially in the secondary.  The attrition from last season to the NFL draft hurt the team, forcing young players into roles that they were not ready for.

Alabama continues to dominate its competition, though keeping starting quarterback AJ McCarron in games for a suspiciously long time.  McCarron needs a big game (and in all honesty, a close game) in order to put himself into the list of players who are viewed as actually having a chance to win the award, which at this point would include Mariota, Winston, and Manziel.

If only the award went to the player who had the most regrettable tattoo, in which case, McCarron would win in a landslide.

Unless Les Miles chews grass and has tattooed an alarmingly lifelike Nick Saban portrait onto his chest, LSU will have trouble on the road in Tuscaloosa. 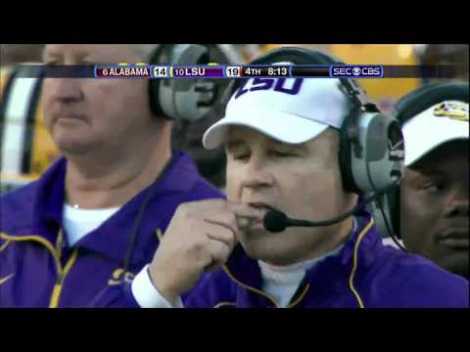 2nd Down:  Stanford vs. Oregon 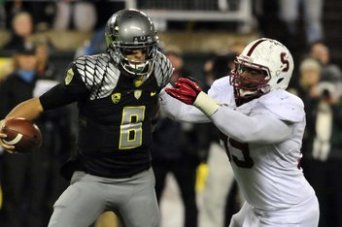 On the same night that John Elway will have his number retired, Stanford will battle the Oregon Ducks.  Oregon is seeking revenge, and to continue it’s path to the BCS National Championship.  Stanford has lost once, in the final seconds on the road against Utah.  However, the Cardinal have played well in recent weeks and look to pull the upset.

Oregon boasts a ridiculous offense.  How ridiculous is the Ducks’ offense?  It’s difficult to replicate the offense numbers being put up even on the NCAA 14 video game.  The Ducks feature Heisman candidate Marcus Mariota as well as DAT, a.k.a. The Black Mamba, a.k.a. D’Anthony Thomas.  Oregon also has an unimaginable number of uniform combinations.  The Ducks have flash, what they don’t have is a proven record against teams like the Stanford Cardinal.

Stanford defeated Oregon last year on the road, and cost the Ducks the chance to play for the national title.  This season, Stanford hopes to place themselves in position for another BCS bowl game.  Stanford held the Ducks to just over 400 yards of offense last year, which by Oregon standards is dismal.

I don’t know why, maybe John Elway is going to suit it up for one more game, but I am going to pick the Stanford Cardinal at home to upset the Ducks.  This Ducks’ loss will pave the way for Heisman hopeful, Florida State quarterback Jameis Winston to leapfrog Mariota in the polls.

3rd Down:  Baylor vs. Oklahoma

Will Baylor beat Oklahoma?  I do believe so, however, the real question remains:  Will it even matter?  Is Baylor so handicapped in the human polls (which will represent 2/3 of the final BCS rankings) that they could finish undefeated without even a second look.  Are we all so certain that Baylor isn’t as good as Alabama, Florida State, and Oregon?

Baylor will go into this game with a lot of confidence after absolutely obliterating their competition this season.  They feature a dynamic offense that has given many teams fits this season.  They are like the Oregon Ducks, but with a Texas twist.

For starters, they are the Baylor Bears, because a duck wouldn’t last a day in a Texas.  They spread the field, as in the entire width of the field, and try to score on each play.  They have a gunslinger at quarterback in Bryce Petty. 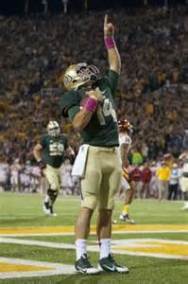 Bryce Petty is like Walker Texas Ranger; only he won’t roundhouse kick you in the face because he’s too busy firing pigskins into your chest.

On the other side, Oklahoma comes in with a coach who talks a lot.  Sadly, Bob Stoops hasn’t won a national title since Destiny’s Child was singing “Say My Name.”

We hear this word used all too often in the world of sports.  Sadly, it is rare to hear it used appropriately.  I just don’t get how we can describe so many athletes as “elite” when (by the very definition of the word) the term should be limited to a select few athletes.

I have to hear all the time about how a player like Matt Ryan is “in the elite category of quarterbacks” and I just want to pause the television and write Chris Berman an email explaining to him what elite means.  Ryan is a good player that is being paid like an elite player, but he is not an elite player.

When it comes to whether or not a player is elite it’s not just about how good they are.  These are players that are better than good, they are great (just call me Tony the Elite Tiger) and because of this their bar of comparison is with the legends of their game.  Do you want to know an easy way to determine if a player is elite? When we stop comparing him to athletes that are currently playing and start comparing his legacy against established legacies.

Lebron James is elite because he is obviously a great player, who is doing great things, winning championships, and when we compare him to other players the only players that people mention are Magic Johnson and Michael Jordan.  Those are two of the greatest players in NBA history.  That is an easy way to determine if the player that you are discussing is elite. 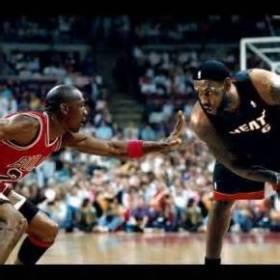