All that separates us from the final CFB Committee rankings, the one that will set the New Year’s Six and playoff field, is conference championship weekend. With the rankings set to come out next Sunday afternoon, this will be the final Playoff Picture column prior to that release. Bearing that in mind, today I will be making my closing arguments for my placement of each team. As always, these are how I would seed the teams if the season ended today. Next week, there will be one final Playoff Picture where I will address where I might have done things differently than the committee. 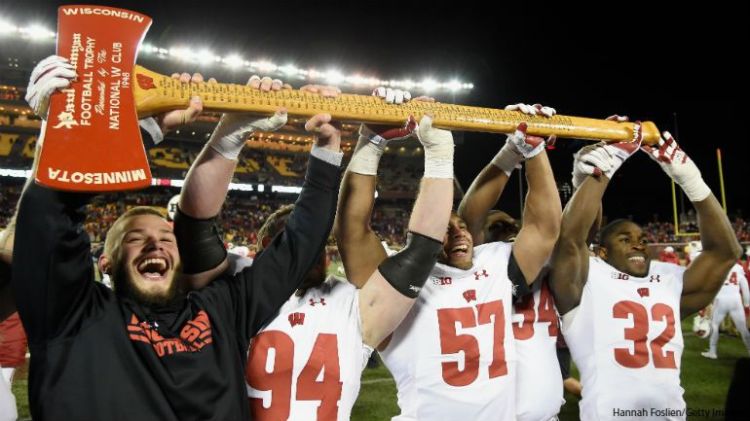 Wisconsin has generated a fair amount of debate about whether or not the committee would (or should) leave out an undefeated Power 5 conference champion. The answer to that is a resounding no. Looking at Wisconsin specifically, the only undefeated Power 5 team I’ll remind you, they have won ten of their twelve games by double digits and even though they play in one of the weaker divisions in the Power 5 they still deserve credit for getting through it unscathed. Also, are we sure the Big Ten West is worse than the SEC East or Pac-12 South right now?

Clemson showed on Saturday night that the team we saw lighting the world on fire in September is still alive and well by throttling South Carolina on the road. They will enter a de facto play-in game against Miami  Saturday night and seek to become the second program to make three consecutive playoffs. There isn’t much argument that needs to be made for or against the Tigers at this point. Clemson has played like a top 4 team for the vast majority of the season, and they will absolutely be in if they win Saturday night.

I know all of the counter-arguments to including UCF in the playoff, and I don’t believe it’s a universal truth that a Group of Five team should get in even if they are undefeated. This team absolutely should get in, as long as they win on Saturday. I’m well aware that “they ain’t played nobody” and “they don’t play in a Power 5 conference” and “they don’t have any five stars!” However, I’m also fully aware that over the course of the season, they have performed well enough to win every week and, like Wisconsin, win by double digits every time except twice. At some point, how you play matters and if every game really is going to matter, that includes how you perform against inferior competition. UCF may not have played the toughest schedule, but they took a flamethrower to that schedule and managed to never drop their guard enough to lose a game. I say give them their shot, and if they blow it so be it.

Oklahoma is a team that doesn’t need me to vouch for them. If they win they are 100% in, and I said last week that if I were picking right now they would be my favorite for national champion. Vegas agrees for whatever that’s worth. The Sooners just need to do it one more time against a tough TCU team on Saturday.

Everyone reading this probably knows me well enough to know that this next paragraph is going to be painful to write. All credit goes to Auburn for how they’ve performed over the last month. They beat Georgia and Alabama, and did so convincingly. Right now, they are easily one of the four best teams in the country. Emphasis on the “right now”. That wasn’t true in September, nor was it true for the first half of October. One of the big misinterpretations of the committee’s criteria is that the “best four teams” means the best four teams at the end of the season. If that were true, Penn State would have made the playoff last year. I do believe that Auburn should be in pole position of any SEC team, ahead of both Georgia and Alabama, however I also believe if the four teams mentioned above all win this weekend then they should be the four playoff teams. But that won’t happen, because the committee would never put a Group of Five team in over an SEC champion regardless of record.

As previously mentioned, Miami is in if they beat Clemson on Saturday, as they should. Miami may have turned back into a pumpkin after two phenomenal weeks, or maybe last week was just an aberration and Pitt is truly a giant killer.

Speaking of TCU, I said last week that they should be thankful for the Big XII title game. That’s because it’s singlehandedly keeping their playoff hopes alive. If they can avenge one of their two losses this weekend, then there’s an outside shot they could get in to the field. I believe they would also need Wisconsin to win to take Ohio State out of the mix. Then the question comes down to two-loss TCU vs. one-loss Alabama for the 4th and final spot (after SEC champion, ACC champion and Wisconsin). That would be a tough call for the committee, but I think the combination of the backlash from excluding a conference champion last year and the committee wanting to avoid putting two teams from the same conference in the playoff would tip the scales in TCU’s favor (even though those aren’t good reasons it’s naive to think they don’t matter).

Living in Alabama, the questions I have been asked the most over the last three days concern whether or not Alabama can or will make the playoff. The answer is they can, but it isn’t likely. First, they have to have either Oklahoma or Wisconsin lose this weekend. Then, I think they would also need Georgia to beat Auburn. Some people might believe that an Iron Bowl rematch, would be what the people want, but television ratings suggest otherwise. Last year’s Alabama-Clemson rematch was the lowest rated championship game in the playoff era, and even when you factor in streaming numbers it was the least watched. Likewise, the LSU-Alabama rematch national title game was the third-least watched championship game of the BCS era. The fact is that, while the state of  Alabama would be all about a rematch, the rest of the country would not. The committee knows this, and even though it shouldn’t, it factors into their decision.

Penn State’s playoff hopes are over at this point, but they seem like a lock for the Cotton or Fiesta Bowl. There is a chance that a Big Ten team could make the Orange Bowl, but they have taken one each of the last two seasons so it seems like an ACC vs. SEC Orange Bowl will be happening this year, with Notre Dame probably being eliminated from New Year’s Six contention last weekend. We may not get a chance to see them in the playoff, but we should all relish in watching Saquon Barkley, Trace McSorley and Mike Gesicki one last time in the same offense.

The Dawgs will get their wish this weekend and get an opportunity to avenge their one loss against Auburn in the SEC Championship game this weekend. Even if they lose, they are still going to be a New Year’s Six team, but if they win they will be playing in the Sugar Bowl (or Rose Bowl) with a chance to compete for a National Championship instead of playing in the Peach Bowl against the AAC Champion. It feels like those are the only two options at this point, which there are worse options to have.

Now for the Buckeyes who, ironically, are in the exact opposite position they were in last year. Ohio State enters the Big Ten title game with two losses, and if they win then it will come down to stacking up their resume against one-loss Alabama and potentially two-loss Pac-12 champion USC and potentially two-loss Big XII champion TCU. This is where the rankings tonight actually matter. If Ohio State stays ahead of both USC and TCU tonight, which I imagine they will, then you have to think that them knocking off Wisconsin this weekend would be enough to keep them ahead of USC and TCU even if those two beat Stanford and Oklahoma respectively. Then it comes down to Alabama, again tonight will inform how close these two stand currently. If Alabama only drops to #4 or #5, and Ohio State is sitting at #8 then the Buckeyes might need to add a few “style points” to the Big Ten title game, but if Alabama drops back to #6 or #7 then I think Ohio State would jump them with a win. Also, remember that I believe the Auburn-Georgia game matters for Alabama’s chances, which means that an Auburn win helps Ohio State if what I have learned about the committee over the last three seasons is still true.