The CFB Playoff will begin today and I think it’s only appropriate we take a moment to reflect on what we’ve learned up until this point about college football.

Texas A&M is an utter mess. I am speechless. I, along with many others, believed that the Aggies would be one of the top teams in the country by 2015. I watched in awe as their 2012 team demolished opponents and finished 11-2. I thought that Kevin Sumlin would build a behemoth in Texas, thanks in part to the following: massive financial resources, in-state talent, his swagger, the decline of the Texas Longhorns, and the ability to develop quarterbacks.

Louisville’s Lamar Jackson totaled just over 450 yards and four scores against Texas A&M. He’s a true freshman (Louisville’s roster is actually quite young) and could make waves if he improves his passing accuracy. He plays the game in a similar fashion to Antwaan Randle El (who played at Indiana). Jackson is taller and faster, while Randle El was smaller and quicker. Randle El later played for the Pittsburgh Steelers (albeit not as a QB).

The situation at Texas A&M clearly took a toll on the team, which failed to match Louisville’s enthusiasm and preparation for the game. I suppose it can be difficult to prepare for a game when you’re trying to convince your five-star QB not to transfer. Kyler Murray is the third five-star QB to transfer out of Texas A&M in two years. What is going on? I’ll share my thoughts with you soon.

Auburn’s quarterback problems aren’t any closer to being solved, but the defense seems to be making strides. In a perfect world, the Tigers would return as many starters as possible (around 15 total) and hope the addition of a new quarterback is all the team needs to see real improvement. I have no idea if that’s going to happen and the team could lose talented guys (Carl Lawson) to the NFL.

The team is in desperate need of a new quarterback to save Gus Malzahn‘s offense. Sean White threw only one touchdown all season, despite starting six games. He doesn’t seem to be an SEC-caliber athlete. I don’t think his ceiling is especially high and this roster isn’t built to carry its quarterback. Jeremy Johnson, dare I say it, actually had a much better QBR than White. I don’t think Auburn should give up on Johnson, but he’s not the star player that many had hoped he would be. 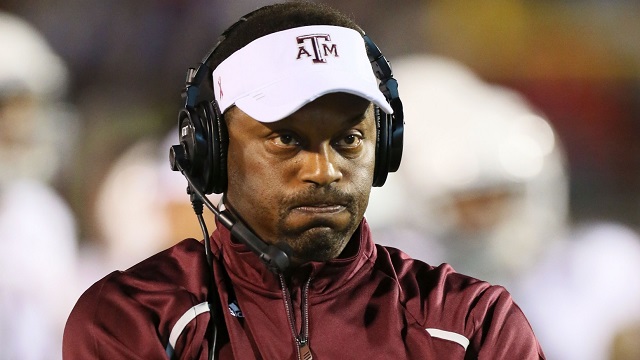 Who is to blame for the recent transfers and the general failure to perform on a team with an obvious supply of talent? Let’s take it from the top!

Sumlin must bear the largest portion of the blame. He’s the head coach and he’s the one who makes the big decisions. I think Sumlin erred when he didn’t back Allen as the starter entering the 2015 season. I think Sumlin is a cool guy (maybe the coolest coach in all of football) and he’s probably a little bit too relaxed. He’s making huge money and he’s going to have to fix this problem sooner rather than later.

The young coordinator is responsible for as much blame as anyone not making enough money to buy a fleet of Range Rovers. Spavital isn’t generally regarded as a guy who gets along easily and he’s been involved in some altercations at practice. He seems likely to be replaced in the upcoming weeks. He found a way to impede an offense with an abundance of talent at WR, HB, and QB.

Hill was clearly a distraction to the team and violated team rules on a few occasions. Texas A&M was happy to see him go.

Allen, however, had to hurt the Aggies when he left. He was regarded as an excellent NFL prospect and looked impressive to start this season. He injured his shoulder and then things went downhill in a hurry. He threw three interceptions that were returned for touchdowns against Alabama. I doubt this will be accomplished again anytime soon.

Murray, a Texas high school football legend, was a surprising departure. Murray was 42-0 in high school and was the Gatorade Male High School Athlete of the Year. Murray is also considered to be a great baseball player (projected to go in the 1st or 2nd round of the MLB Draft). Murray was too reliant on his running ability when he played this season. I was surprised Sumlin could not convince Murray to stay. Murray (a 5-star recruit) turned down the opportunity to start at Texas A&M, which would have been assured after Allen left. I’ve got to think Murray has a deeper issue with Spavital since the two got into it before the Ole Miss game this season.

Manziel might’ve had a negative impact on the way that Sumlin and the Aggies look at the position. Manziel was mostly a natural, a guy who used tremendous instincts and good athletic ability to devastate the opposition. Manziel was unpredictable and his on-field performance reflected that. The opposing teams had a difficult time preparing for a player who abandoned the scripted play so often and opted to play backyard football. Manziel’s success probably distorted A&M’s fan base into believing their scheme was better than it was.

An offensive guru that has turned Texas Tech into a potent team (at least offensively) departed after one year in College Station. Kingsbury clearly helped Manziel and the offense was best under his guidance. He called plays that helped Manziel get into a rhythm and didn’t constrain his artistry when plays broke down.

I know Sumlin is the man in charge, but Spavital spends the most time with the quarterbacks. These guys were clearly unhappy and he’s their positions coach. The decline in the offense is pretty apparent, but the problem is difficult to pinpoint. Texas A&M has tremendous talent and can’t seem to score at times. The players deserve some of the blame and we don’t really know how well they are preparing or not. I think that still goes back to Spavital. It’s likely that he will be fired and that a new coach will be brought in to save the offense (and maybe Sumlin’s job).

Sumlin, despite the expectations that stem from having such tremendous resources, is still doing well based upon the standards set at Texas A&M. The program is stronger today than it has been. Sumlin has never finished worse than 8-5. Sumlin has won 75% of his games at Texas A&M and the legendary Dana Bible won 77% of his games. Hopefully, Sumlin will find the right guy and add a transfer QB like Trevor Knight. The future rests on the shoulders of 2017’s 5-star prospect, Tate Martell.