We at 4 Down love humor, and even more than that we love laughing at ourselves and each other.  So today let’s take a look at some of the dumbest things I wrote back in the Summer when trying to forecast the college football season.  Also, to all of you fanbases who I either gave false hope (sorry it’s my anti-drug) or undue criticism (feel free to take it personally) to then let me go ahead and apologize.

Phil Montgomery had a much more immediate impact than I anticipated, and admittedly Tulsa beat a few teams who I also severely overestimated (looking at you UCF and UL Monroe).  Dane Evans had a huge year for the Golden Hurricane passing the ball for just under 4,000 yards, 22 touchdowns and eight interceptions.  His top target, Keyarris Garrett, also had a monster season with 1,451 receiving yards.  Also, Tulsa was much better at home owing to the schedule being significantly less difficult than I thought when I said that Florida Atlantic would be their easiest opportunity for a home win…UCF and UL Monroe were also home games.

Props to Southern Miss for making their ascent back to respectability as swift as their descent out of it a few years ago.  The Golden Eagles have been on a roller coaster ride for the last few years as they have oscillated between hot, young coaches who make them good but then leave for greener pastures.  Such is life for a team with the athletic budget that Southern Miss has competing in the FBS.  However, Todd Monken did a great job this year with the team and might can make a few years of success in Hattiesburg happen before he is inevitably hired by a Power Five program. 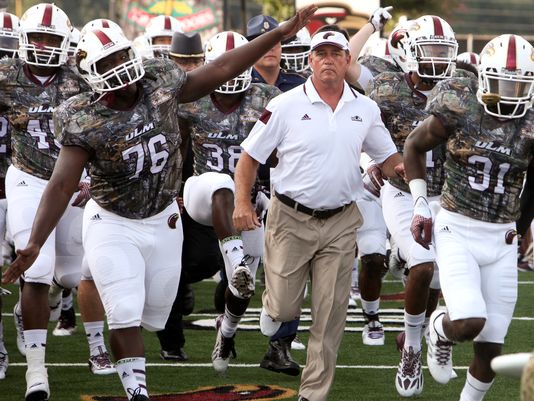 What happened in Monroe this year?  UL Monroe went 4-8 last year, but Todd Berry is still around and this team felt like a bowl team going into the year.  Those feelings were almost as mistaken as camo football uniforms.  The Warhawks not only failed to get bowl eligible, but end up being one of the worst teams in college football with losses to Idaho, Texas State, and Hawaii a.k.a. Murderer’s Row.  Part of the problem was All-Sun Belt receiver Rashon Ceaser missing a good part of the season due to injury, as did many other key contributors, but it was still bad and at some point the question of how much longer before all of the good fortune Berry bought in the Kolton Browning era is used up.

What happened in Louisiana this football season?  Seriously this is a major issue.  Name one football team in the state of Louisiana who met or exceeded expectations this season…go on I’ll wait.  UL Lafayette was coming off of four straight bowl appearances and victories, and decided to follow up with winning one game this season for every bowl game they’d won in the last four.  The Cajuns lost by three touchdowns to Akron and finished the season with four consecutive losses included losses to South Alabama, New Mexico State and a blowout loss to Troy in the finale.

You know that cool thing when you zig on something and everyone else was zagging?  Yeah that’s what I went for here and it blew up in my face.  Pretty much everybody thought the Falcons would repeat as MAC East champs except me, which just adds to the long list of reasons why you should never listen to me.  Dino Babers and the “Falcon Fast” offense killed the MAC with Matt Johnson leading the way at quarterback.  Next year could be a transition year for the Falcons though with Babers heading to Syracuse.

So this was a two-fold boner on my part.  Not only did I suggest that the Bulls would go 2-10, but I also intimated that I thought this would be the end of the Willie Taggart era in Tampa, and not because he wanted to leave.  Taggart proceeded to get an interview with South Carolina, turn them down, and sign an extension to stay in Tampa.  All I can say here is my bad.  Mea culpa.

It took until about 2:00 P.M. EST on opening Saturday for pretty much everyone to realize that they were either going to be wrong about Northwestern or Stanford.  Considering that Stanford just won the Pac-12, it’s safe to assume that Pat Fitzgerald’s Wildcats were the team we were wrong about.  Speaking of Fitzgerald, he pretty much silenced the critics who thought he should have moved on when the opportunity presented itself a few years back.  The Wildcats might never be a perennial powerhouse, but they won ten games for the second time in the Fitzgerald era this season and our proving to be a competitive out in the reinvigorated Big Ten.

From predicting them to miss a bowl game to wondering aloud whether or not we were sure they were good, my preview for the Heels was one of the harshest of the season, and it ended up being one of the worst too.  I picked UNC to win the division in 2014 and they were a disappointment, and after losing the opener to a South Carolina team that went on to win three games my pick looked pretty good.  Then, North Carolina proceeded to win eleven straight before losing in the ACC championship game on Saturday.  Oh yeah and I also said that Larry Fedora might get fired or end up on the hot seat, he got a seven year extension instead.

Let’s all just pause for a moment and bask in the glory of my ACC champion pick.  They went 3-9.  One more time: my preseason ACC champion pick only made it halfway to bowl eligibility.  The Yellow Jackets did start strong winning their first two games by a combined score of 134-16 and six of their nine losses were by eight points or less.  Whether or not Tech is the best 3-9 team ever is ultimately irrelevant, but it is a legitimate debate too.  The Jackets will likely bounce back next year, but I guess they really couldn’t resist sticking it to a UGA alum for picking them to do well and using their beloved math to do it.

I mean….what do you want me to say?  Did you have the Golden Knights going winless?  Lest we forget, UCF is less than two years removed from a Fiesta Bowl win over Baylor.  Anyone who saw the complete free fall in Orlando coming then props to you for either having great foresight, Grays Sports Almanac, or being a gifted liar.  Central Florida will probably bounce back from this in a few years, because they aren’t this bad of a program but this had to be one of the worst seasons in FBS history.  Hey, even if they don’t turn it around at least they can take solace in living in the happiest place on earth right?