College football is in a state of constant change this week. Today, we learned that Will Grier will be suspended due to a violation of NCAA rules. Grier is reportedly to have taken PED’s resulting in a failed drug test. He will appeal the suspension in the hopes that he won’t miss the first six games of the 2016 season. USC officially fired Steve Sarkisian this afternoon. Michigan is riding high and Texas came back from the dead.

Hail to the Victors

Jim Harbaugh has the Michigan train moving in the right direction. The Wolverines keep improving and there is no doubt they have what it takes to upset the Michigan State Spartans this weekend. The Wolverines have improved tremendously over the last few weeks and their defense has been the main ingredient in that success.

Michigan will continue to improve in the coming weeks and Harbaugh will have the program back to an elite status soon. He rants and raves on the sidelines like a lunatic. He’s got a personality that is borderline frightening. He’s a Michigan man and the program’s future looks bright in the hands of one of their own.

Charlie Strong got a much needed victory over the weekend. The Longhorns beat the Sooners and it came at a perfect time. The Longhorns used a run-heavy offensive strategy and their defense stopped Oklahoma’s rushing attack. The Longhorns also rushed the passer really well and the ‘Horns did what it took to get the big win.

Texas needs to enjoy the win now because there is a difficult slate of games ahead. I don’t know if the strategy the Longhorns used will be applicable for the rest of the year. This is still an uphill battle for the Longhorns to get to a bowl game. The win should help infuse some positivity into the program. 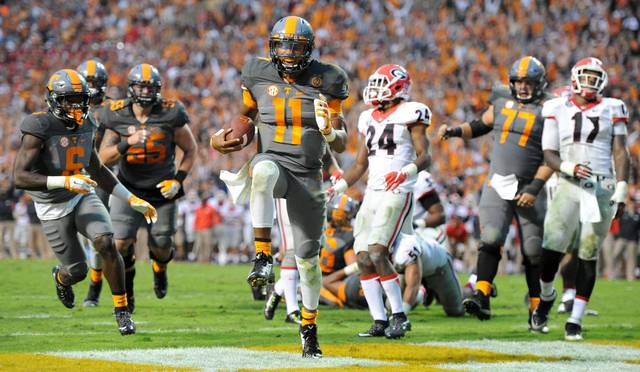 The Tennessee Volunteers got a big win and it has to feel good. They had lost three close games and lead by a pretty nice margin in all of those losses. Josh Dobbs had a huge game and now Tennessee has a week off to get ready for a trip to Alabama to face the Alabama Crimson Tide.

Tennessee looked like one of the sad stories of the season. I was worried they would implode and ruin a season that had been better than most thought so far. The close losses made things look bad. The progress is still being made and Tennessee’s future is still pretty bright. Negativity sells quickly in college football and it’s good the Vols have something to smile about.

Dalvin Cook is absolutely on fire. He totaled 269 yards and 3 touchdowns in a win over the Miami Hurricanes. He’s the primary cog in an offense that’s been a little inconsistent so far. Florida State is looking pretty good and their defense is elite at times. Cook is bearing the weight of the offense while a young receivers get better. Cook is moving up the list of Heisman contenders and if Florida State can win the ACC then he might just win the award.

You hate them, I hate them, we all hate them. Nickelback doesn’t care and they just keep doing their thing. Nickelback’s thing is ripping the same melody with the same angst and pushing the limits of the word unoriginal.

3. Maryland Terrapins- If Today Was Your Last Day

5. Auburn Tigers- When We Stand Together

6. Memphis Tigers- Gotta Be Somebody

8. Nebraska Cornhuskers- How You Remind Me

9. Baylor Bears- Trying Not to Love You

So what is the rationale?

I’ll start by saying that I had to look up most of these songs. I listened to these 1:30 minute sessions of each song. The process was difficult and I’m not sure if I’ll ever hear again. So here is why each song was chosen.

Trevone Boykin and Josh Doctson saved TCU this weekend. The defense rallied after a bad first half and the Horned Frogs came back to win. Utah is feeling great after another win over a good team and are looking like a CFB Playoff contender. Maryland’s Randy Edsall coached his final game. Ohio State is due to find it’s offensive and defensive rhythm someday soon. Auburn dismissed Duke Williams and now the guys that remain are going to have to stand together through the rest of the season. There are plenty of tough games remaining and they’ll have to rally around a each other to get to a bowl game.

Memphis is undefeated and is trying to prove they belong. They have a shot this weekend with a home game against Ole Miss. USC needs a new coach and Nebraska keeps losing in the final seconds. Nebraska’s close losses and bad season are reminding them that things are not what they used to be. The analysts and fans are trying not to love the Baylor Bears. Baylor looks like a team with a potent combination of offense and defense. Missouri’s Maty Mauk can’t let Drew Lock be alone at the top on the depth chart. He favorited tweets criticizing Lock’s performance over the weekend.