The “inches” speech needed to be included as the intro at least one time in this preview series.  Penn State seemed like the most apt team to use it on for two reasons: a) a blue-blood program needed an old school movie with an intense speech from Al Pacino and b) Penn State lost a ton of close games last year, that if they can flip the script on they can reach double-digit wins in 2015.

Christian Hackenberg may be the most recognizable name on this Nittany Lion roster, but if he has a huge year in 2015 it will also be because he has one of the strongest group of receivers in the conference.  DaeSean Hamilton and Geno Lewis combined for 1,662 receiving yards last season, and are both back as a menacing tandem on the outside.  Chris Godwin should also see plenty of playing time after turning 41 targets into 26 catches for 338 yards last season as a freshman.  The Nittany Lions do lose tight end Jesse James, but Adam Breneman and Mike Gesicki both showed promise as true freshmen.  Breneman, however, was a true freshman in 2013, but missed all of 2014 because of a knee injury.

As for Hackenberg, he needs to build off of that outstanding bowl performance, because by and large he has yet to live up to his five-star billing.  He passed for just under 3,000 yards and 12 touchdowns-to-15 interceptions last season.  Not only is that not as good as advertised, that’s pretty mediocre by any standard.  Hackenberg has shown flashes of his ability, enough so that he is still widely considered a first round NFL talent, but it would sure be nice for him to reflect it a little more in both the stat and win columns.

Akeel Lynch is another guy that could really help out the Penn State cause by taking a step forward this season.  Lynch did split time with Bill Belton last season, so his 678 rushing yards and four touchdowns isn’t bad, but he is the only running back on this roster with a college carry.  The five other running backs on the roster are all freshmen.  If Lynch could emerge as a bell-cow, 1,000-yard rusher and make this offense a balanced run-pass threat it would make the Nittany Lions a very dangerous team.

Continuing on the theme of taking a step forward, one group that absolutely must improve this season is the Penn State offensive line.  If there is any legitimate excuse to be made for Hackenberg’s failure to meet expectations, it’s that he has had to throw behind a shaky line.  Now, that line has been a bit thin because of sanctions, but the performance has been bad enough that the sanction excuse can’t be entirely to blame.  The whole right side of the line and center Angelo Mangiro return, which should help in theory.  Also, left guard Brendan Mahon started nine games as a freshman last season.  JUCO transfer Paris Palmer is expected to step in at left tackle.  If continuity is as valuable as advertised, then this line should be leaps and bounds better than last year.

Ok enough of that “taking a step forward” nonsense, if this defense can just replicate last year’s performance they’ll be one of the stingiest defenses in the conference.  The Nittany Lions were the number two defense in the country in total defense, and top ten against both the run and the pass.  Perhaps the strongest element of this defense is the lack of an easily identifiable weakness.

Defensive tackle Anthony Zettel is a one man wrecking crew, and his main partner-in-crime in the middle of the line, Austin Johnson, is also returning.  Zettel had 17 tackles for loss, eight sacks and three interceptions last season.  Yes, at defensive tackle he intercepted three passes.  That’s insane!

Both ends have to be replaced, and none of the replacements are oozing with experience.  Grant Sickels showed flashes as a true freshman with three tackles for loss and two sacks, but beyond him the options are either an inexperienced upperclassmen or an infinitely less experienced freshmen.  Senior Carl Nassib seems to be the frontrunner for the other end position.

Mike Hull is the only linebacker that needs replacing, but he did top 100 tackles and 10 tackles for loss by himself last season, so it isn’t exactly trivial.  Nyeem Wartman and Brandon Bell both return though.  Wartman topped fifty tackles and Bell had 7.5 tackles for loss, plus each of them had an interception.  Jason Cabinda is the most likely replacement for Hull.  Cabinda had 12 tackles in eight games as a freshman last season.

Safeties Jordan Lucas and Marcus Allen return to what should be a solid secondary again in 2015.  Neither of them picked off a pass last season, but they did combine to break up twelve passes.  Trevor Williams returns at corner where he picked off two passes and broke up five last season.  Sophomores Grant Haley and Christian Campbell should contribute at corner also, but Haley is the frontrunner to win the starting job opposite Williams. 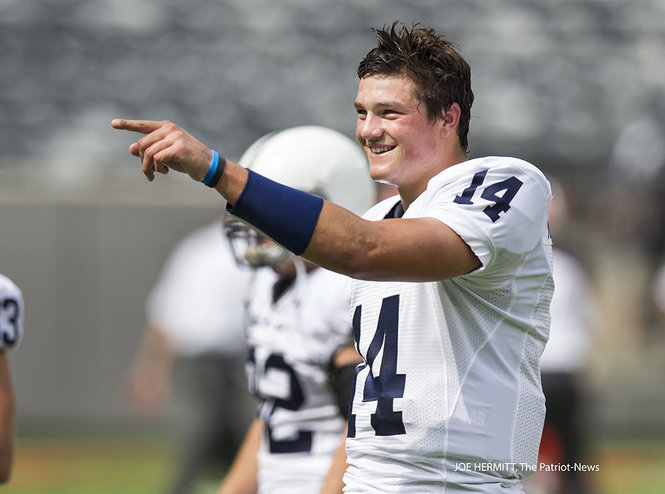 This team has plenty of talent, and by missing Wisconsin, Nebraska and Minnesota from the West, the conference schedule is as favorable as any East team is going to get.  Ohio State and Michigan State will still be tall tasks, and Penn State has to play both of them on the road.  The Nittany Lions play Ohio State in the seventh game of the season, but the six before that should all be winnable, especially with five of the six being at home.  The Maryland, Illinois, Northwestern, Michigan stretch between Ohio State and Michigan State will be the critical stretch that determines if Penn State is a 10-win team or a .500-ish team again.