If slow and steady truly does win the race, then the UTEP Miners should win plenty of races in 2015. UTEP is a true an anomaly. In an age where everyone wants to be a hare, the Miners embrace their role as the tortoise.

As with any ground and pound team, the maulers up front and the running back are critical pieces. Aaron Jones certainly fits the mold of a bell cow back. He rushed for 1,328 yards and 11 touchdowns. It should that four starters return up front. The lone departed lineman, Jerel Watkins, was a four-year starter who will be tough to replace, however. Another potential concern is finding another back to lighten Jones’ workload. The two primary backups behind Jones are both gone.

Autrey Golden is one of the top return men, and can be a two-way threat out of the backfield. My bet would be that he sees more carries and is second only to Jones in carries and rushing yards.

Now is where the tough part comes, neither I nor anybody else has any idea how this team is going to move the ball through the air. Mack Leftwich is most likely to be the starter. He won the job in 2013 as a true freshman, but was replaced after struggling early. In a rare but actually pretty smart move, he redshirted last year so that he can come back now with three years of eligibility left. He should be better than he was in his abbreviated first stint as a starting quarterback, but how much better could be the difference between four wins and seven wins.

It also hurts that the only two players on this team who went for over 100 yards receiving last season were the running backs, Jones and Golden. The biggest question mark facing this team, along with Leftwich’s play, is who will step up and lead this team in receiving. Jaquan White is the big guy to watch. White averaged 23.8 yards per catch last year, but that was only on a four-catch sample size. 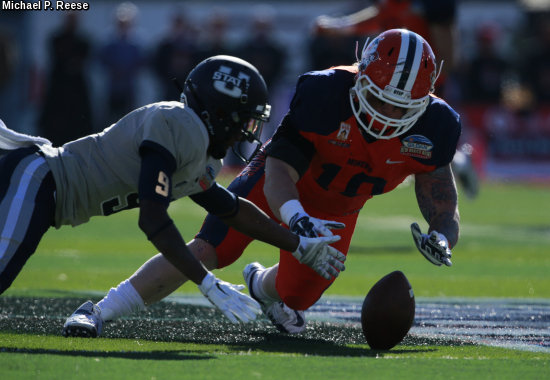 Playing a ball control game can win a lot of games, and it can even win title. What it can’t do is win hardly anything without a legitimately good defense. The whole idea behind a ball control game is to allow your defense to thrive by keeping them fresh and opposing offenses off the field. UTEP’s defense was solid in 2014, but there are a few areas that definitely need improvement and some key losses to replace.

With both ends and the nose tackle returning, the defensive line should be solid, both figuratively and in literal mass. Surprisingly, these guys didn’t register huge tackle numbers, but some of that may be attributable to how few plays opposing offenses ran. Ends Nick Usher and Roy Robertson-Harris combined for 15 tackles for loss and 6.5 sacks. That isn’t great, but it can be good enough with good play behind them at linebacker.

WLB Alvin Jones is a solid linebacker and his play last year was definitely good enough. He singlehandedly came up with nine tackles for loss, a pick and three passes broken up. Jones is back, and while Jimmy Musgrave isn’t technically a returning starter at the other linebacker spot, he might as well be considering that he played in every game and managed to record two sacks, a pick and a forced fumble.

Secondary was the biggest area of concern last season, and there’s reason to believe it might be even more of a concern this year. This team’s Achilles’ heel defensively was that it gave up too many big plays through the air, and with four of five starters gone from last year’s secondary that problem could be exacerbated. On the other hand, sometimes a fresh start helps.

Devin Cockrell returns at free safety, and his backup Dashone Smith is the second leading returning tackler in the secondary, so it seems safe to assume that he will move to one of the other safety spots. (Note: In UTEP’s 4-2-5 scheme they designate three starting safety positions). Cornerback is an even bigger question mark, but anticipated starters Ishmael Harrison and Traun Roberson are both seniors and have at least seen some playing time.

UTEP was one of the bigger surprises in the conference last year, and building on that momentum they ought to be a bowl team again in 2015. However, with their first three games on the road, two of which are against Arkansas and Texas Tech, the schedule doesn’t offer them many breaks. The did manage to avoid Marshall and Western Kentucky however, and get to play Louisiana Tech at home, so scratch the end of that last sentence, they do get a few breaks.