I’ll be breaking down the best of the best sports movies in a wide array of categories in this series. I know we all have our favorites and no doubt some deserving films and scenes may get left out but I will try to make the tough decisions a little bit better than Roger Goodell has done over the last year (or six years).

Hoosiers is one of the best sports movies ever made by the human race.

Gene Hackman stars as a Norman Dale, a coach who made a mistake and let the pressure of the game get the best of him. He is like a much more loveable Bobby Knight. He takes a job in a small town in Indiana called Hickory. The townspeople don’t receive Dale with open arms. Dale meets with star player, Jimmy Chitwood, who has quit the team due personal reasons. Dale tells Chitwood that he doesn’t care if he plays or not and that it is his choice.

The season begins and things are not going well. Dale’s defensive emphasis and pass-oriented offense are not what the team is accustomed to running. People are calling for Dale to be forced out and a petition is signed.

Things turn around when a player’s dad named Shooter (who is also the local drunk) starts feeding him tips on opposing teams.

This was the SpyGate version of Indiana high school basketball.

At midseason, things are looking grim for Hackman. The audience who didn’t check the run time on the movie might even think that this is how it all ends. But, Hackman’s job is saved when Jimmy Chitwood (more on him later) agrees to “play ball” so long as Dale keeps his job.

So, after (possibly illegally) adding a player midseason, things take off for the Hickory High Hoosiers. Obviously, in 2015 if a rival high school added a star player midseason parents would be up in arms and there might be lots of red tape. However, in this “simple town” nobody even makes a fuss that their child isn’t getting enough playing time.

Chitwood shoots about 97% from the floor and guides the Hoosiers to the state title game. They face a “big city team” and their team minister (didn’t realize that every high school team had one) makes an epic reference to David and Goliath before the game. The game comes down to the final shot and Chitwood knocks down an NBA-caliber 3-pointer with a hand in his face like he’s Reggie Miller.

The film centers on the redemption of a coach, the arrival of hope into a town that hasn’t had much to be happy about, and the ability for sports to build hope in places where this is little to smile about.

Blue Chips stars Shaquille O’Neal as a high school basketball recruit who plays for the (fictitious) Western University Dolphins. He is an absolute monster. I don’t think he has to settle for anything less than highlight reel dunks for the entire season.

This was “Orlando Magic Shaq.” He was young and could run the floor. He would rebound and had some nimble post moves. He was also huge (7’1 ft. tall and weighing around 300 lbs.). He could put a number line like 36 points, 20 rebounds, 7 blocked shots and people would just shrug and say “that’s Shaq.”

The NBA changed the rules in the lane because he was so dominant.

However, it was a little predictable. For anyone who has seen the movie, Anfernee “Penny” Hardaway (Butch McRae) and Shaquille O’Neal (Neon Boudeaux) both starred in the film and at the time were two of the best young players in the NBA. 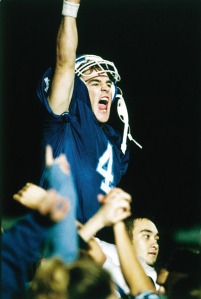 Varsity Blues is a high school football movie that is too big for theaters, unless those theaters are in Texas.

James Van Der Beek plays the role of John Moxon, the 2nd string quarterback at West Canaan. He is more interested into getting into Brown University than he is in learning the playbook. Moxon is coached by the legendary, (and notorious) Bud Kilmer. He backs up a star player in Lance Harbor (played by Paul Walker) who is labeled “All-Texas.”

Anyone who knows what “All-Texas” encompasses please comment so that we can greater understand the terminology of the great state of Texas.

Moxon fires a pass while sitting down to the referee early in the movie, while he reads a book on the sideline. He is hiding a book behind the playbook! He isn’t even paying attention.

Suddenly, Harbor goes down with a serious injury and in comes Moxon.

Moxon displays a dual-threat ability that nobody could have ever predicted. He plays like Steve McNair. How in the world could he have not started somewhere else on the field? He has rare athleticism and possesses an ability to make plays out of nothing. He looks a lot like Tony Romo when using his “feel” in the pocket to evade the rush and has an uncanny ability to throw the deep pass.

The season goes on and the drama continues to build up for the cliché “big game.” An epic soundtrack plays in the background and Foo Fighters’ “My Hero” blasts during some critical moments.

Oh yeah, Moxon stands up to the coach at halftime and then comes up with a game plan for the second half like he’s Mike Leach. The spread offense sparks a massive comeback and Moxon leads the team back for a win for the ages.

1.  “In America, we have laws. Laws against killing, laws against stealing. And it is just accepted that as a member of American society, you will live by these laws. In West Canaan, Texas, there is another society which has it’s own laws. Football is a way of life.” – John Moxon, Varsity Blues

2.  “Playing football at West Canaan may have been the opportunity of your lifetime, but I don’t want your life!” – John Moxon, Varsity Blues

3.  “Being perfect is not about that scoreboard out there. It’s not about winning. It’s about you and your relationship with yourself, your family and your friends. Being perfect is about being able to look your friends in the eye and know that you didn’t let them down because you told them the truth. And that truth is you did everything you could. There wasn’t one more thing you could’ve done. Can you live in that moment as best you can, with clear eyes, and love in your heart, with joy in your heart? If you can do that gentleman – you’re perfect!” – Gary Gaines (shockingly played by Billy Bob Thornton), Friday Night Lights 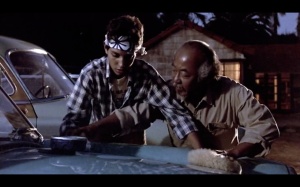 The Karate Kid is not a movie about a team sport and it is often forgotten when people think about typical sports movies. However, Miyagi turned Daniel LaRusso from a skinny, Italian kid into a skinny, Italian kid who knows karate. He uses unconventional methods to teach Daniel how to fight. What are those methods you may ask?

He makes Daniel do chores around his house.

Imagine if you could become a karate warrior by filing your taxes and running errands! Everyone under the age of 13 would be knocking each other over to help their parents out around the house so that a few weeks later they could teach the bully in 8th grade a lesson!

Check back next week for Hollywood Highlights: Part 2!