Bryce Petty returns to lead an offense that was as prolific as any in the country last season. They figure to put up big offensive numbers yet again, especially with leading receiver Antwan Goodley and talented running back Shock Linwood. The defensive line will be a strong point of the Bears’ defense as it is very deep. However, there are some depth concerns elsewhere on the defense and on the offensive line. The Bears are my pick to win the conference, but they are a significant injury away from finishing 4th or 5th.

There is a lot of buzz surrounding the Sooners this off-season after they dismantled Alabama in the Sugar Bowl to end the season. Their schedule also sets up extremely well, with them being fortunate enough to play Oklahoma State and Baylor at home. However, there are a fair amount of question marks. Blake Bell and Trevor Knight return at quarterback, and even though they accounted for 800 yards last year on top of their passing accomplishments, the offense will replace their top three running backs: Brennan Clay, Damien Williams, and Roy Finch. This makes the loss of Joe Mixon to a season-long suspension seem even more costly. They do return their whole front seven on defense though, and two in the secondary.

The Cowboys will be a little green in 2014, which might make the opener against Florida State rough. However, the talent is there and they do have an experienced quarterback in J.W. Walsh. Desmond Roland also returns as the leading rusher from a season ago.

Charlie Strong may return Texas to national prominence, but it won’t happen overnight. The Longhorns will be good in 2014, but a tough schedule might prevent an improvement in terms of wins and losses. David Ash returns at quarterback, if he can stay healthy. If he does go down, then Tyrone Swoopes is waiting in the wings. The offensive line will be anchored by center Dominic Espinosa. 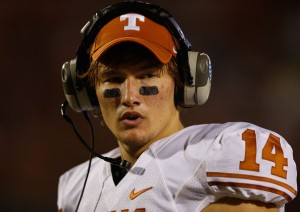 TCU will likely be the most improved team in the conference this season. A fair amount of that has to do with Texas A&M transfer Matt Joeckel, who should take the reigns at quarterback. He should bring a level of efficiency that the offense sorely lacked in 2013. The defense on the other hand, was exceptionally efficient in 2013, but susceptible to the big play. Most of that defense returns, except star corner Jason Verrett. If the defense can cut down on big plays, they will be one of the best in the country.

The Red Raiders may have the most handsome and charismatic coach in football, and by may I mean they do. They do have some issues that need resolving though. The passing offense was great last year, but their two leading receivers are gone. What’s more concerning is that one of the few bright spots defensively last season was the secondary, and it is pretty much all gone. If Texas Tech improves on defense in 2014, then they will improve in the win column. For now, I think they stay about the same.

Some experts believe that Bill Snyder’s team is a dark horse to win the conference this season, but I can’t see it. They do have a knack for overachieving and won six of their last seven in 2013, but they also simply lack the talent to compete with the upper echelon Big 12 teams. They do have a good quarterback in Jake Waters, and Tyler Lockett will be one of the best receivers in the conference. Cody Whitehair and B.J. Finney are also all-conference caliber offensive linemen.

Clint Trickett may have kissed Nick Saban’s daughter, but he won’t have an easy time scoring in 2014. The Mountaineers were inefficient offensively in 2013. They did reel off big plays, but too many three-and-outs led to inconsistency. Defensively, they had the opposite problem. They were relatively good at limiting the big play, but were nickeled and dimed to death. 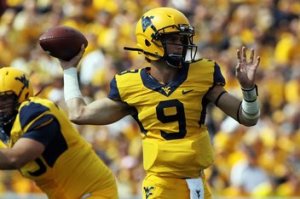 Paul Rhoads is probably very proud to coach this team, but that won’t translate to many 2014 wins. They simply don’t have the talent to compete, and their color scheme inexplicably reminds me of ketchup and mustard. One strength of the team will be the receiving corps with leading receiver Quenton Bundrage returning and the arrival of USF transfer D’Vario Montgomery and true freshman and Rivals’ number 47 overall recruit Allen Lazard.

There hasn’t been much cause for optimism in Lawrence in the last few years, during football season at least. They haven’t been a power conference team with a winning record since my freshman year of college (for those of you who don’t know me I’m now working on my Master’s). The one cause for optimism is they return nine starters on a defense that was better than mediocre last season. They also have potentially the best name in college football, other than Fudge Van Hooser, in running back Brandon Bourbon.