Donte Moncrief will soar up NFL draft boards in upcoming weeks thanks to his sensational combine performance.  The Ole Miss wide receiver made a lasting in impression in Indianapolis over the weekend.  It is important to keep in mind that at 6’2 and 221 lbs. that he has the size that NFL scouts are looking for.

Moncrief finished with a 4.40 official forty, which was good for the 3rd fastest time by a wide receiver and the 4th fastest of any offensive player.  He also was a top performer in the vertical leap at 39.5” (also good for 3rd amongst wide receivers).  The broad jump showcases how explosive an athlete is.  Moncrief didn’t disappoint finishing in a tie for 1st amongst wide receivers at 11’0” feet.

The combine gave Donte Moncrief an opportunity to showcase his athletic prowess and he was one of the surprise stars of the 2014 NFL Combine.  The majority of fans were surprised to see Moncrief outperform players like Sammy Watkins of Clemson or Marqise Lee of USC.

I wasn’t surprised in the slightest because I considered him to be one of the most underrated players in this years draft.

I had the opportunity to watch Moncrief for two seasons while I was a student at Ole Miss.  He was a bright spot during his freshman season; however, the team struggled to a 2-10 record.  So despite his own successes, he went largely unnoticed due the difficulties the team was enduring.

Moncrief reaffirmed my opinion to a great deal during his sophomore season.  He had tremendous games against Texas (7 rec. 144 yds. 1 TD), LSU (6 rec. 161 yds. 2 TD), and Mississippi State (7 rec. 173 yds. 3 TD).  Moncrief’s season culminated in a career day against Johnathan Banks of Mississippi State.  Banks won the Jim Thorpe Award and was a 1st Team All-American.  At this point, I felt that he could become a star in the right system.  Moncrief posted a productive senior season, however, the Ole Miss passing scheme shifted away from the vertical routes that Moncrief was better suited to run and more towards a passing scheme centered more on screens and shorter throws.  This was in part a necessary response to the ailing shoulder of Ole Miss quarterback Bo Wallace and to the number of receivers that needed to be targeted this season.

I feel that Moncrief would be best utilized in a vertical passing scheme like that of the Detroit Lions, Green Bay Packers, or Indianapolis Colts.  In this scheme, Moncrief could use both his vertical speed and his frame to his advantage.  Donte Moncrief isn’t a traditional jump ball receiver, however, he adjusts to the ball well.  He can make plays going across the middle and could be featured in the screen game.  He reminds me a lot of Demaryius Thomas in terms of his playing style and build.  He excelled as a blocker in the Rebel offense that featured a lot of screen passes and outside running plays.  That was worth mentioning because it is an undervalued and learned skill that showcases a receiver’s physicality.

I feel that his combination of athleticism, physical stature, and playing style will translate well at the next level.  I think in the right situation he could perhaps be drafted as high as the top portion of the 2nd round and I feel very confident that he will have his name called on Day 2 of the NFL Draft.

Oh, I forgot to mention that NFL franchises could play “Feed Moncrief” in their stadiums after each Donte Moncrief touchdown.  It warrants a few minutes of your time and a special thanks to the King Kobraz for writing this song. 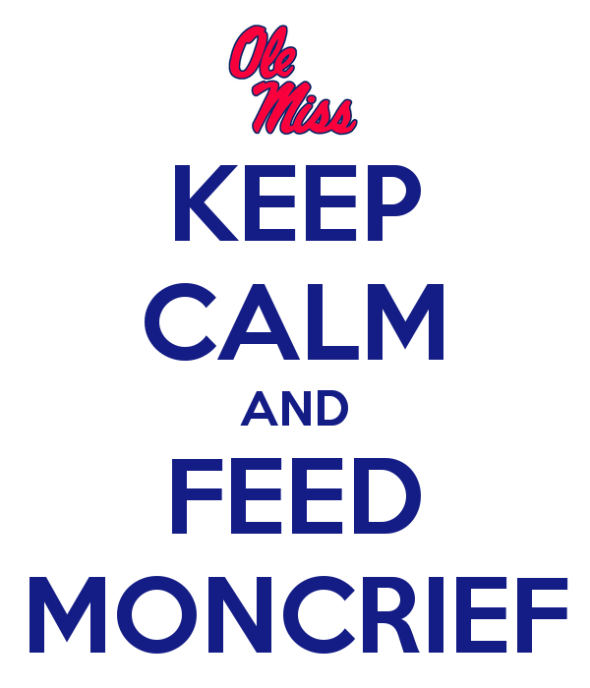