The NBA All-Star weekend has come and gone.  The game itself was more like a glorified pick-up game with the best players in the world, than an actual basketball game.  Like every other North American professional sport all-star game, the NBA All-star game leaves much to be desired.  With a new owner coming in, this is the perfect time for a change to the all-star game format, and I have the perfect proposal.

Rather than doing an all-star “game” with the Eastern Conference vs. the Western Conference, the NBA should do an All-Star Streetball Tournament.  Here’s the format: one 3-on-3 team from each division (that’s 6 teams total), teams comprised of 4 players (so 24 total all-stars), play games to 21 (1’s and 2’s and win by 2), and call your own fouls.  Just as a preview here are what the rosters from this year’s teams might look like:

Atlantic (Street Name: “I’ll try as hard as I can on every third possession”)

Southeast (Street Name: “The Heatles Plus One”)

Northwest (Street Name: “That White Guy is Lights Out”)

Can you imagine how epic this would be?  No one remembers who wins the All-Star game, but everyone would remember who won the NBA All-Star tournament.  Also, there could be brackets for your office pool.  I’m going to go ahead and copyright the name February Frenzy.  Sports bookies are already lining up to shake my hand.

Let’s step back for a second, though.

How do I know people will even watch this?

The famous Chappelle’s Show skit “Prince vs. Charlie Murphy pickup game” has 4,404,618 views on YouTube.  For anyone super mathematically challenged, that’s almost four and a half million!  If that can get views, this certainly can.  Can’t you just picture Steph Curry calling out plays titled “Computer Blue” and “Darlin’ Picky”, Kevin Love setting “fruity picks”, and LeBron ending the whole thing with a reverse jam and floating to the ground like a sorcerer and proclaiming, “Game Blouses!”?

I will consider this my application to be the official planner of the NBA All-Star weekend. 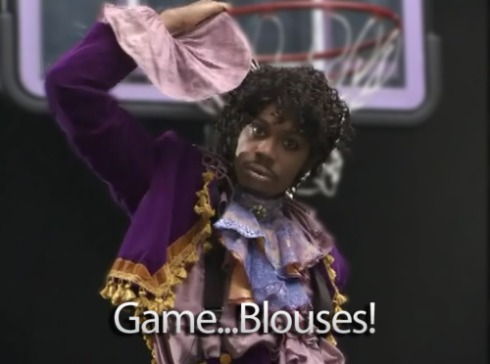