Targeting in College Football: How to Improve the Rule

The Day the SEC Went Haywire

What to Do after National Title Aspirations are Dashed

Welcome back everyone, and as always thank you for reading.  Here’s your weekly reminder from me to feel free to make comments or suggestions for future topics.  If you haven’t done so, follow us on twitter (@4_DownTerritory) and look out for our tweets announcing upcoming posts and general musings from the two of us on the week in sports.  We are also pleased to announce that the “4th and 10” segment published last week will become a weekly post coming on Wednesday of each week going forward.

First Down:  Targeting in College Football 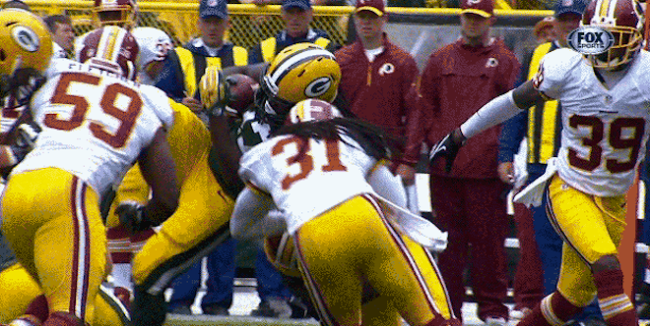 Pat Daley, one of my fraternity brothers at the University of Georgia, immediately texted me after the Ray Drew targeting penalty on Saturday.  The penalty cost the team 15 yards and their sacks leader.  He sent another emphatic message later when a Ramik Wilson targeting penalty gave Vanderbilt a first down after failing to convert on 4th down after failing to convert.  This ultimately led to a Vanderbilt touchdown to cut the Georgia lead to 27-21, and Vanderbilt went on to win 31-27.

The NCAA rule regarding targeting reads: “No player shall target and initiate contact to the head or neck area of a defenseless opponent with the helmet, forearm, hands, fist, elbow or shoulder.  By rule when in question, it is a foul.”  The penalty is 15 yards (or an automatic first down) and an automatic ejection of the guilty player.  This rule is intended to promote player safety, something that I think everyone can agree is paramount.

The problem with the rule is that it has shown to be very ineffective at distinguishing between a dangerous, illegal hit and one that is violent, but legal and necessary to making a play for one’s team.  This will, in all likelihood, cost a team a game soon and the outcries for a change to this rule will increase beyond where they are already.  One potential solution for the competition committee to review next year is the ability to review the ejection, and the enforcement of the penalty.

Currently, the ejection portion of the penalty is the only part available for video replay and verification.  The reasoning for this is that no other penalties are currently eligible for review either, so it is a consistency issue.  However, if you are going to put this much power in the hands of an official to levy such a devastating penalty his judgment ought to be subject to review.  No, this will not lead to all penalties being subject to review just this specific penalty.

Second Down:  Chaos in the SEC 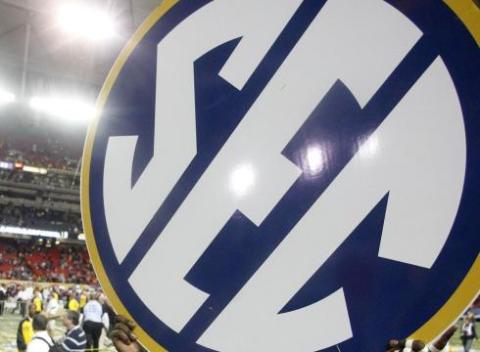 Saturday was one of the wildest days in recent memory for the Southeastern Conference.  Five major upsets to shook up the conference championship picture: Vanderbilt over Georgia, Missouri over Florida, Tennessee over South Carolina, Auburn over Texas A&M, and Ole Miss over LSU.  Georgia was already behind the 8-ball having lost last weekend to Missouri, but still could have won the East by winning out and having Missouri lose a couple.

Missouri further put itself in the driver’s seat, and a win this coming weekend against South Carolina would all but assure them a conference championship birth.  Auburn controls its own destiny now after beating Texas A&M. Both LSU and Texas A&M will now need a great deal of help to win the West with two conference losses apiece.

This weekend effectively did two things for sports fans (specifically SEC fans): made all of our preseason predictions look moronic and made the rest of this season very interesting by blowing both divisions wide open.  Don’t feel bad about your preseason picks though, even college football guru and outside-the-box thinker, Phil Steele, didn’t see this coming in the SEC.  Alabama has been what we thought so far, but just for example Phil Steele picked both Missouri and Auburn to finish 6th in their respective divisions.  Missouri is in first in the east and as said previously, Auburn controls its own destiny in the West.  His first, second and third predictions in the East and picks to finish second and third in the West all have at least two SEC losses and it’s not even Halloween.

Let’s take a quick look at the biggest remaining SEC regular season games.  In the East, South Carolina and Missouri square off this upcoming weekend and if South Carolina could manage a victory they’d need to win out and have Missouri lose another game and the East is theirs.

If they lose, Missouri only needs to win two of their four remaining games against Tennessee, Kentucky, Ole Miss and Texas A&M.  The A&M game will be a tough matchup with “Johnny Football” but they will play at home.  Tennessee and Ole Miss can play them tough and certainly could pull out the win, but Missouri is slowly starting to prove that they may be for real.

The two biggest games left in the West are Alabama vs. LSU and the Iron Bowl (Alabama vs. Auburn).  LSU can get back in to the West picture by beating Alabama, but they’d need help with another Alabama and Auburn loss each (one of which will presumably lose in the Iron Bowl although there has been one tie in the 77 games played between the two schools).

The biggest game appears to be the season-ending, and reportedly marriage-ending in some Alabama households, showdown between the Tide and the Tigers.  If both schools win the rest of their games leading up to this, which is no guarantee, then this would not only be a bragging rights battle but potentially a game to determine who goes to the SEC championship and potentially the BCS national championship.

Third Down:  When Goals Change

Every year, a few teams come into the season with national title aspirations only to have them dashed before Thanksgiving (or if your team is very unlucky and/or overrated Halloween or Columbus Day).  One question for these teams is where do you go from here?  Do you pack it in and just start focusing on recruiting and getting your future stars experience?  Do you try to play spoiler and ruin your rivals’ seasons?  Do you continuing playing the same regardless of whether or not your goals are intact?

The answer is some combination of the three.  You certainly owe it to your seniors and players leaving for the draft who have played their tails off for you for multiple seasons to continue to compete and send them out on a good note.  It also is a good time to start trying out some younger players, and get them some game experience and a feel for how they can be used in the team’s system in the future.  I’m not suggesting benching players or making wholesale changes, but giving guys a series here or there that they may not get if you’re still in the hunt for a national title may be worth considering.  However, your seniors who got you in the preseason national title talk in the first place were presumably good in previous seasons if the team came in as a national title contender deserve the support of the underclassmen, fans, coaches, and administration.  Teams owe it to all of their players, but especially their seniors, to play to win every game regardless of whether or not season goals remain intact.

I’m going to try for a little bit of redemption and make my prediction for the series.  Wade Cotton I hope you’re reading this, I’m going to pick the Cardinals to win in five games.  They will pick up one of the first two at Fenway Park and then take all three of the games at Busch Stadium.  I visited Busch Stadium earlier this year for the first time, and was very impressed with the crowd atmosphere.  The Cardinals are peaking at the right time and behind that home crowd in St. Louis will be too strong for the beard power from Bean Town.

Adam Wainwright and Michael Wacha have been phenomenal in the postseason for the Cardinals and it’s hard to pick against the Cards with either of them on the bump.  Wainwright is the probably starter for Game 1 in Boston.  Offensively, the big boppers for the Cardinals are Carlos Beltran, Yadier Molina, and Matt Holliday have combined for 5 home runs and 19 RBIs this postseason.  The return of Allen Craig from a mid-foot sprain should also add an offensive boost for the Cardinals and even though David Freese has been relatively quiet this postseason, except a two-run home run to clinch Game 5 against the Pirates, and a little nicked up leaving Game 4 against the Dodgers with a calf injury, this is generally about the time of year where he heats up.

One thought on “4 Down Territory”